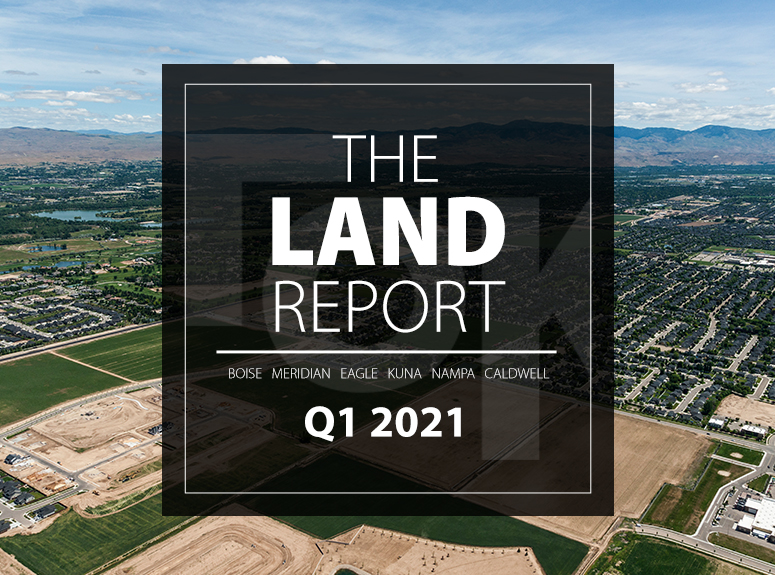 Like most sectors, the uncertainty at the onset of the pandemic resulted in a brief slowdown for the commercial land market in early 2020, however, the sector picked back up in the latter half resulting in a year-end total of 345 acres sold and a total consideration of over $68 million. Activity in all sectors remained strong, though industrial land continued to be the most sought after, with transactions up 47 percent from 2019 to 2020.  The value of industrial land rose drastically in both Ada & Canyon counties, due to high demand — although, industrial land is expected to remain the hottest sector for buyers in the foreseeable future despite the continued escalation in price.

2020 was also a recording-breaking year for single-family development, with over 7,000 permits pulled and total value hitting $1.7 billion. Even with an increase in residential development, demand continued to outpace supply with months of supply ending at just 0.4 months in Ada County. The high in-migration rate was one of the main driving factors behind low supply, with Idaho’s population growth at a rate three times the national average.

Other areas of development were stalled due to slow entitlement processes, which made a noticeable impact on the Land market through the year as many cities fell behind due to the impact of COVID-19.  This resulted in fewer commercial permits being pulled in 2020 compared to the former year.  Fortunately, development is likely to increase by mid-2021 as cities are able to return to a more timely and efficient entitlement process. Commercial development in 2021 will center around newly completed large projects such as Costco in Meridian and the Amazon Distribution Center in Nampa, keeping commercial land activity strong in the coming year.

For more information on the land market, you can read our current Quarterly Land Market Report or subscribe to receive monthly updates.